The What, Why, and How with Paul Payne 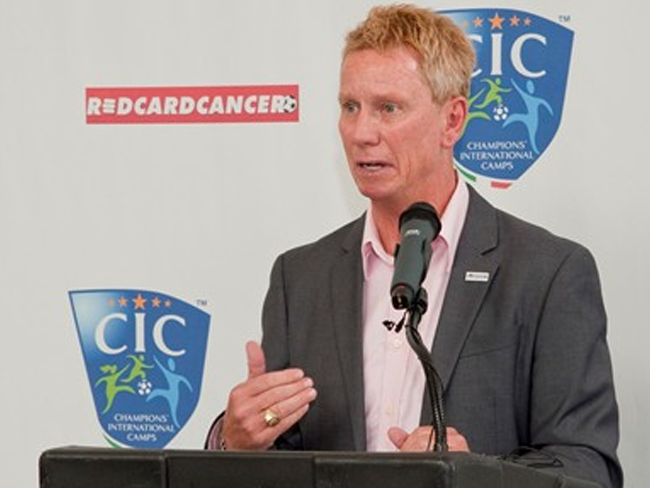 For many of us, springtime represents a time of revitalization, a time to shake off the layers of winter and reconnect with what matters most to us, both on and off the pitch. For Paul Payne, the founder of Red Card Cancer, this means leveraging opportunities to unite the soccer community together in the fight toward one singular goal – defeating cancer.

The reality is that cancer is not a “niche” cause, or something that only affects somebody else. Instead, you would be hard-pressed to find someone who has not been affected by cancer, either through their own battle or that of a loved one. Thus, the question becomes: how can Red Card Cancer help me make a difference? In his own words, Paul explains the what, the why, and the how behind Red Card Cancer and its role in sending cancer off the pitch.

According to Paul, what differentiates Red Card Cancer from other fundraising organizations is the unique role it plays in the soccer community after the funds have been raised – more than just a one-time, cause-based fundraiser, RCC is a way to bring communities together both on and off the field. As coaches, teachers and parents, RCC can help to expand what the sport is able to teach our kids through all stages of their soccer careers. In fact, Paul states that “the more we can teach kids that there is a responsibility beyond just being a soccer player – that even a 10-year-old player can make a difference – the more impact we can have. We can do more through soccer. We can teach kids how to get involved and how to see things through from start to finish.”

Today, it is nearly impossible to find someone who has not been touched by cancer in some way – and the myriad of walks, 5K runs, and pink ribbon campaigns illustrate this fact. So why Red Card Cancer, and why now? For Paul, the reason is obvious: “I don’t think this opportunity has been there before. What is unique about us is that this is a chance to get involved with something that can be crafted to your community. It isn’t the same no matter where you go, and it shouldn’t be. This is about taking ownership – it is about more than just wearing a pink shirt or a ribbon and stopping there.”

Even for those who may be fortunate enough to have never experienced firsthand the impact of a cancer diagnosis for themselves or a loved one, Paul poses another question: “Why not now? Why not your team to be the one to stand up and say that we raised these funds for cancer research? You’re doing something – you’re getting involved. Football players wear pink, and very few of them have personally had breast cancer! Don’t use not knowing what to do as an excuse to do nothing.”

The ways to get involved with Red Card Cancer are as numerous as the teams who participate. For those looking to utilize the most tried-and-true methods of RCC fundraising, designating a match is the simplest way to get involved – in fact, it involves no more effort than wearing specific t-shirts or ribbons as part of a cancer awareness campaign. Pledging a percentage of the registrations fee for a tournament towards cancer research has proven itself to be highly effective as well – and requires no extra work beyond a few small posters announcing the effort. For those seeking a more in-depth event, matches between rival teams – with trophies for both the game winners and the fundraising winners – have been incredibly successful. By competing for the most funds raised to support cancer research, the teams are honing their competitive skills – but it isn’t about goals scored. According to Paul, it’s not about coming up with the most elaborate or complex idea, but about learning from each other and from our communities. In fact, “the more that we can find out exactly what others have done to support RCC, and the more we advertise those successes, the easier it will be for others to follow in their footsteps – why not be a part of this journey? In soccer, we don’t necessarily want the best players on our teams – we want the players that make a difference. Everybody has the capability of doing something. You are somebody. You can do this.”