Get to know us and learn why the organization was started, where the money goes, and who is involved in our organization.

Review the RCC Playbook. It tells you how to get involved, what to do, and provides additional tips for your event(s).

The playbook is provided in the section below and via PDF for you to print and distribute.

Get together with your peers and identify your own innovative fundraising and awareness methods to make this a unique experience for your community.

Register your event. There’s a form on the homepage and on this page. Let us know what you will be doing, how we can help and even share with us some new, out-of-the-box ideas you’re using.

Welcome, From Our Leaders

I want to thank you for taking the initiative to join us in our efforts to defeat the world’s biggest opponent.

Everyone has been touched by cancer in some way, and it is the stories and efforts of many individuals – like you – that are making Red Card Cancer such a success. Players, coaches, parents, and fans from across both the nation and the world are lending their support to help give cancer a red card.

This packet has been assembled to assist you in sharing Red Card Cancer with others in your community. Please visit the Red Card Cancer website for updates, and do not hesitate to reach out to our staff with any questions that you may have.
Good luck, and welcome to our team!

Whether you are a parent or a player, a referee or a tournament director, getting involved in the fight to cure cancer is easy! Take a look at our event guide below to get some ideas, and remember that our dedicated staff is here to support you along the way!

The list below has been put together after several years of successfully engaging teams across the U.S. Some were original RCC concepts, but many were the innovative ideas of those who wished to add something a little extra to their own event(s).
From the list below, choose what you would like to include in your event(s):

Apply Your Own Ideas

Soccer is all about being creative. We encourage participants to brainstorm and think up some ideas of their own that would enhance their Red Card Cancer event. If it proves to work effectively, let us know and we will add it to the Recommended Activities list for future participants to use. Don’t hold back! Any idea is a good idea for RCC!

Choose Dates For Your Event(s)

The next step involves choosing the dates/duration over which your event(s) will take place.

Some common durations for events include:

The form is located on this page, or you can go to www.RedCardCancer.org/pages/forms/register and fill out the form so we can learn more about your efforts and help in any way possible.

This step is optional, but highly encouraged. Press coverage for RCC events has helped the program to reach new heights. Many participants have integrated some sort of press and media coverage into their RCC event. These types of coverage include:

On November 8th, the Sharpsburg High School soccer teams decided to take on an even bigger goal – curing cancer. Partnering with Red Card Cancer, a program that unites the global soccer community together towards finding a cure, the event raised over $4,000 towards cancer research.

Working together, the boys’ and girls’ teams hosted two Red Card Cancer matches, and players from both teams raised funds by bringing in pledges made by members of the community. Sales of wristbands and t-shirts took the team’s efforts one step further, bringing them to their impressive grand total and helping to spread the word about Red Card Cancer to the local community.

Thanks to the initiative of the Sharpsburg High School soccer players, as well as that of the community supporters who pledged funds towards their efforts, we are one step closer to defeating the world’s biggest opponent.

With the guidance we’ve included in this playbook combined with your own ideas, it’s now time to begin hosting your event(s). Good luck!

Contact us if you have any questions during the process 🙂

Please follow the steps below after your event is completed: 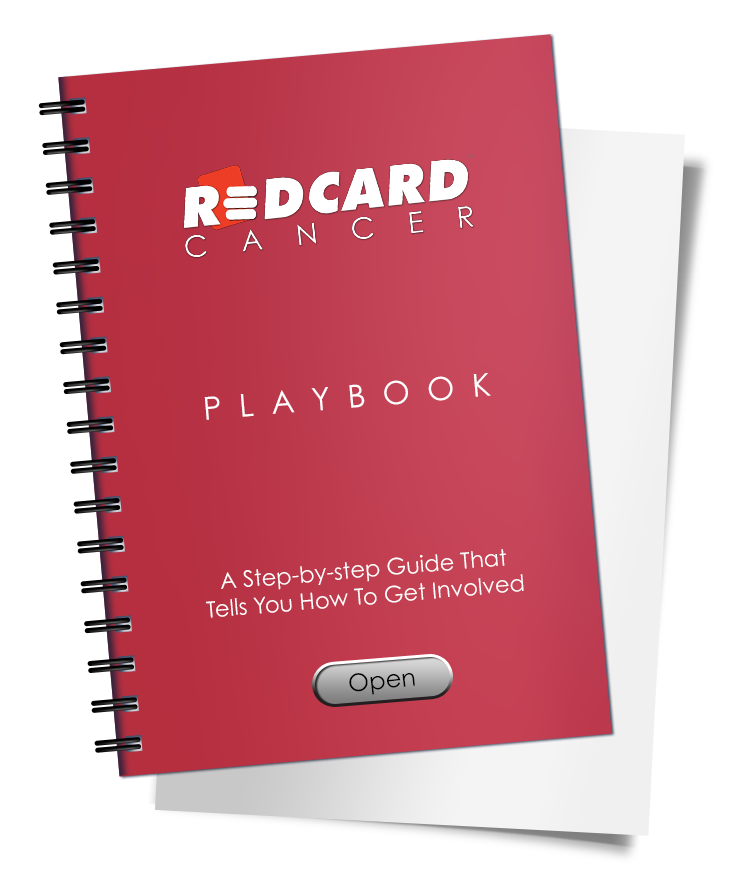