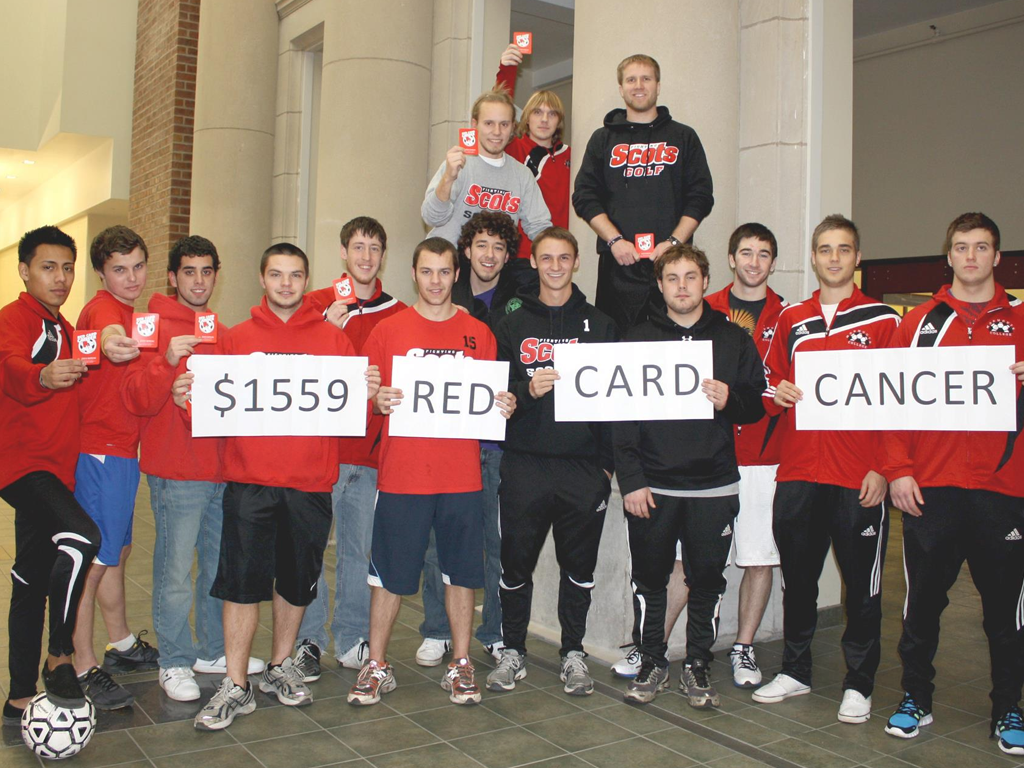 On Saturday, Oct. 29, 2011 the men’s soccer team played their last game of the season. While they lost 2-1 to Beloit from a last minute goal, they were victorious with the amount of money they raised for the Red Card Cancer Program.

“In soccer, a player given a red card is eliminated from the game,” said Coach George Perry. “The Red Card Cancer program hopes, through research, to give cancer a red card and eliminate the disease. Money raised will benefit cancer research at the Johns Hopkins Kimmel Cancer Research Center. This program was founded by Paul Payne, a friend and soccer coach at Bloomsburg University and President of the National Soccer Coaches Association of America. Payne developed the program in honor of a coaching friend who was lost to cancer.”

Perry was eager to get his team involved with the program because of a past player, Chris Anderson, who lost his sister to cancer. Perry also lost a brother-in-law and several college teammates from cancer.

“We decided to pledge money based on season long statistics,” Perry said. “I challenged them that I would pay a quarter of what we pledge if they would split the remaining three-quarters. We decided to pledge $10 for every goal we scored, $5 for every assist, $1 for every shot and $20 for a shut-out. We extended an invitation to families and friends to pledge based on these statistics plus goals and ties. Some have done this and some have made a single donation.”

Although the team raised money for charity, there season came to an end after being two goals short.

“Our primary goal was to make the MWC Tournament that we missed by a goal differential of two goals,” said Perry. “We tied for points with Lake Forest, but they had a plus 11 and we had plus nine. Three of our goals did not count, because the most you could earn in a game is four and we had beaten Knox 7-0.”

The Scots finished the season 8-6-2 overall, 5-2-2 in the Midwest Conference. Midfielder Logan Simpson lead the team with 14 goals, nine assists, and 59 shots over the course of the season.

The article was written by Kelsey Beshears, Sports Editor at The Courier at Monmouth College.