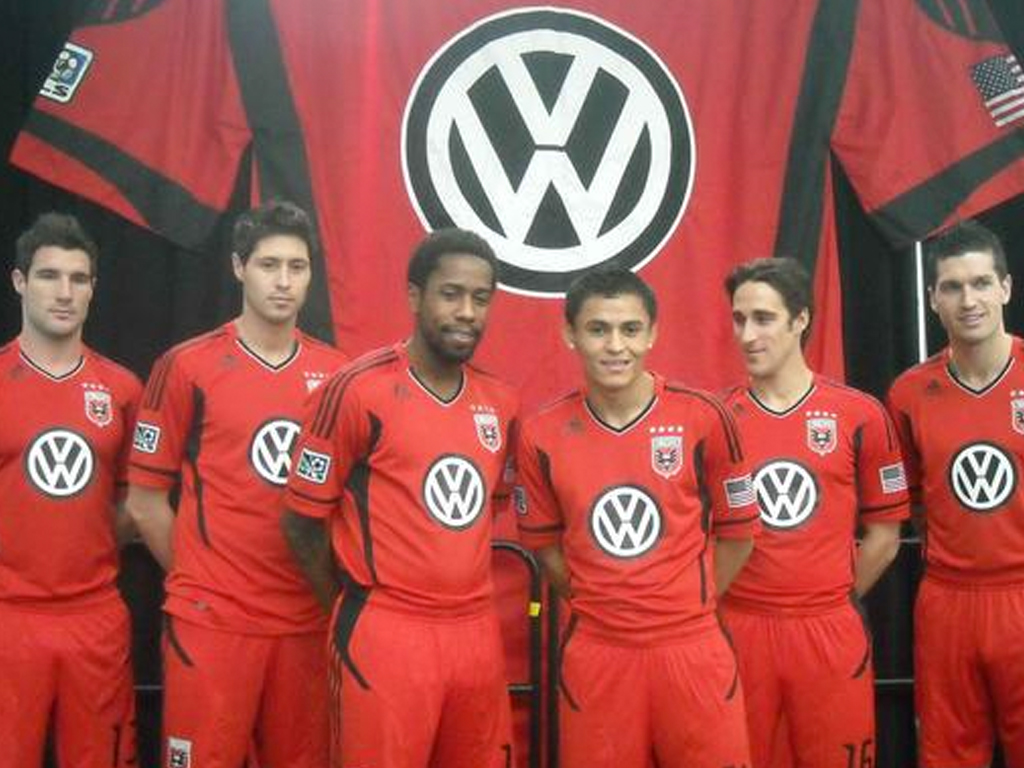 Washington, D.C. – D.C. United today announced plans for a third kit to be worn during the 2011 season. The full kit will be unveiled on Saturday, January 29 at 2:00 p.m. on the L Street Bridge of the Walter E. Washington Convention Center. The presentation, featuring Branko Boskvic, Andy Najar, Chris Pontius, Santino Quaranta, Clyde Simms and Josh Wolff, anchors D.C. United Day at the Washington Auto Show™, presented by Volkswagen. The players will appear at the Volkswagen booth from 2:30-3:30 p.m, following the jersey launch. Julius James and Kurt Morsink will appear at the Volkswagen booth from 1:00-2:30 p.m. on Sunday, January 30.

“We’re very excited about the new look that this alternate jersey will provide our team,” said D.C United Executive Vice President Stephen Zack. “The fact that the Volkswagen logo is so prominent on the front of our shirt is not lost on us – they are a wonderful company and are integrated into everything we do. We’re thrilled to launch the third kit with them at the Washington Auto Show.”

“Volkswagen is excited to have D.C. United here with us at the Washington Auto Show to showcase our continued partnership,” said Ben Freidson, Sports Strategy Manager, Volkswagen of America, Inc. “It’s important for us to be a part of this high-profile event with a team that is so integrated into the community. We’re looking forward to an exciting season together.”

Created by Adidas and prominently featuring the Volkswagen logo, D.C. United’s new kit will debut during the MLS regular season. The third jersey will be available for pre-sale at dcuteamstore.com on Saturday at approximately 3:00 PM following the unveiling. Jerseys are expected to begin shipping on Feb. 18. The authentic third jersey will be available for $110. $5 from each jersey sale will be donated to Red Card Cancer, a fundraising initiative for cancer research in partnership with Johns Hopkins Kimmel Cancer Center.

Volkswagen of America, Inc.
Founded in 1955, Volkswagen of America, Inc. is headquartered in Herndon, Virginia. It is a subsidiary of Volkswagen AG, headquartered in Wolfsburg, Germany. Volkswagen is one of the world’s largest producers of passenger cars and Europe’s largest automaker. Volkswagen sells the Eos, Golf, GTI, Jetta, Jetta SportWagen, CC, Tiguan, Touareg and Routan through approximately 600 independent U.S. dealers. All 2011 Volkswagen vehicles come standard-equipped with Electronic Stability Control (ESC). This is important because the National Highway Traffic Safety Administration (NHTSA) has called ESC the most effective new vehicle safety technology since the safety belt. Visit Volkswagen of America online at www.vw.com or www.media.vw.com to learn more.