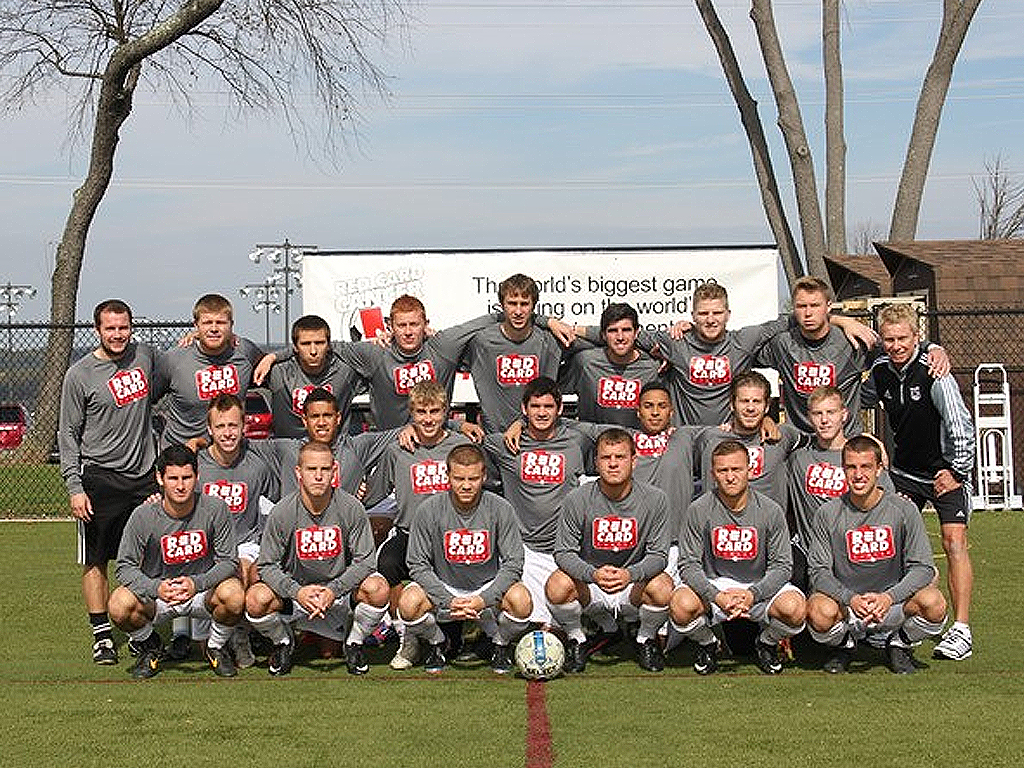 Something Bloomsburg University men’s soccer head coach Paul Payne put together as a grassroots project to honor two friends has grown into an international effort to bring down one of the world’s deadliest diseases.

Red Card Cancer has taken root not only in places across the United States, but has stretched to take a global presence as well. A non-profit charity, Red Card Cancer is committed to fundraising efforts promoting cancer awareness and research with the ultimate goal of one day finding a cure. Today RCC works with high schools, universities and community groups across the nation including partnerships with The Sidney Kimmel Cancer Research Center at Johns Hopkins Medicine as well as D.C. United of Major League Soccer and A.C. Milan, one of the most well-known teams in the world.

While Red Card Cancer has touched many lives during its short existence, it began as a way for Payne to keep alive the memory of someone who had touched his own. When former University of Scranton coach Joe Bochicchio, a close friend of Payne’s who gave him his start in college soccer, lost his battle with melanoma, and another friend, Charlotte Moran, also lost her battle with cancer, Payne had the idea of using the world’s most popular game to take out one of its worst diseases.

“We know that cancer is devastating to people and we thought the soccer community needed to have a rallying point,” Payne said.

Paul Payne speaks at a press conference this past May at John’s Hopkins Hospital announcing Red Card Cancer’s partnership with Champions International Camps and A.C. Milan legends.
The first-ever Red Card Cancer Day was held at Bloomsburg University along with other schools in the Pennsylvania State Athletic Conference in 2009 as a purely grassroots, local effort. October 3, 2009, was designated as Red Card Cancer Day across the PSAC and the organization raised over $5,000.

Since then, Red Card Cancer has made an impact well beyond BU and the state of Pennsylvania. In August, $6,000 was raised toward the cause at an exhibition soccer match between Clemson and Wofford Universities in South Carolina. Four members of Italy’s A.C. Milan – Alessandro Billy Costacurta, Fabio Cannavaro, Massimo Oddo and Massimo Ambrosini have joined, using their status within the game as a way to share the word on an international scale. There are also plans to host RCC tournaments all around the United States.

Paul Payne speaks to an audience of over 100 at Johns Hopkins Medicine’s campus in Baltimore, MD during a press conference introducing Champions International Camps as a partner of Red Card Cancer.

“It’s developed into an international organization,” Payne said. “Something small to recognize my good friends has developed into something we hope down the road will have a major impact on people’s lives.”

The growth of Red Card Cancer has proven the power of the game of soccer and the influence it has on countless people across the globe young and old.

“It’s a huge community. If you can get that community rallying behind this cancer awareness and research campaign it can make huge inroads in helping us cure all types of cancer,” Payne said. “That’s the message. Internationally we’ve had some work with people in Italy and Latin America and with the World Cup. It’s affecting more and more people around the world. The world’s biggest game taking on the world’s biggest disease, hopefully Red Card Cancer can send off cancer.”

Payne credits the influence of social media as a key in spreading the word. With the help of former BU student-athlete Jared Ferreira, who designed the RCC website, the organization continues to be introduced to more people around the world each day online.

“Because of the power of social media we were discovered,” Payne assessed. “We ended up partnering with The Sidney Kimmel Cancer Center and because of that four legends from A.C. Milan Champions International Camp are now our partners.”

Red Card Cancer allows each individual group to tailor the program to meet its needs. Payne said some groups have battled each other to see who could raise the most money while some high school coaches have worked the program into their classroom work as writing assignments.

“It’s not a cookie cutter fundraising program,” he said. “We’re looking for ideas to learn and grow from each other.”

Beyond the dollars and cents of the initiative, Red Card Cancer creates perhaps an even more important response – allowing those afflicted by the disease to, for a few moments anyway, focus on soccer and not cancer.

“The most impact that I’ve seen in one moment for me, we had a press conference at The Sidney Kimmel Center when we announced our partnership with the Milan legends,” Payne described. “Billy Costacurta, a legend from A.C. Milan and the Italian National team was there. We were with some young cancer patients and there was a boy hooked up to machines being treated.

“We were in a small gymnasium and he didn’t care about all the IV’s stuck in his arm. He was taking shots against Billy Costacurta and we couldn’t get him away from the ball. That was so neat to see because here’s a young man struggling with the disease and he was just excited to be kicking a soccer ball. He didn’t think of himself as a cancer patient. That was the one moment I thought, we could have an impact.”